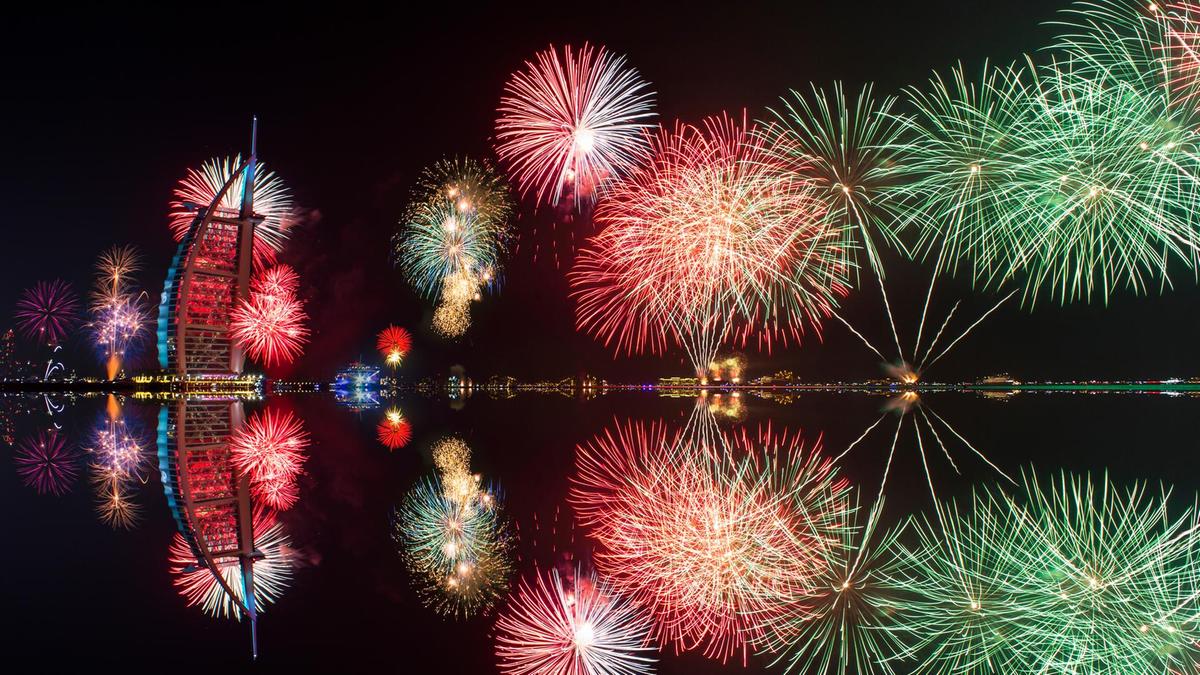 Weekends in the UAE are always spectacular – bustling with offers, deals, and a galore of entertainment avenues! There’s absolutely no doubt about that.

But something is oh so special about the upcoming weekend – the one that’s super looong (30th November – 3rd December) owing to the 47th UAE National Day which befalls upon the 2nd of December. So then, it is obvious to expect all things grand and extraordinaire marking the celebrations and spirit of the National Day. Might we suggest a few options where you can witness the extravaganza, in case you’re falling short of plans or haven’t decided anything for the weekend?

Live Entertainment at the Burj Park

There are live concerts happening at the Burj Park from 6pm until midnight for two days (1st Dec and 2nd Dec) to commemorate the UAE National Day.

Footed between the Burj Khalifa and the Dubai Mall, the iconic Burj Park will offer breathtaking live concerts by regional artists besides its stunning and scenic views on the 1st and 2nd of December.

The Arabic icon Waleed Al Shami will engross the audience at the open-air venue followed by the local jewel Ahlam on Dec 1. The next day will witness the performance of the pop icon Balqees – the daughter of well-known musician Ahmed Fathi. Performing alongside her will be the award-winning singer Hussain Al Jasmi who will sing his super hit national songs such as his debut single ‘Bawada’ak’.

What’s the best part about this presentation, you ask? It is FREE!

The entire horizon over the Arabian Gulf will light up with a scintillating display of fireworks. A visual symphony of fire, lights and colours will take over the sky on the 2nd of December starting at 8pm at The Beach (JBR), followed by Al Seef at 8:30pm and finally at La Mer at 9pm.

So who all are up for this free spectacle? We know we are.

There’s going to be a state-of-the-art IMAGINE show reflecting the colours, spirit, and heritage of the nation. And that’s not all. There will be the newest choreography of laser, water, and lights alongside a scintillating fireworks display over the Dubai Festival City sky at 8pm and 10pm on 2 December.

To boost the event, many of the mall’s leading retail stores will also host incredible sales to book you for a fantastic shopping and dining experience highlighted by the stunning fireworks.

Global Village is having the seasoned Nation Day Emirati Singer Hamad Al Amri take on its main stage on 2nd December. His performance along with the wide expanse of entertainment, emanating from diverse shopping sprees and live shows to delicious food from foreign countries, will make your National Day 2018 unforgettable!

The entrance ticket of a meager AED 15 is an additional attraction.

Learn about the Nation’s Heritage at the Mall of Emirates

Mall of the Emirate’s bespoke live production commemorating the UAE National Day will take audiences to the beginning of the region’s history, from well before skyscrapers sprung from the sand to the days Bedouin tribes roamed the land.

The production will be followed by an incredible pearl passion show, with distant wave sounds pulling the story towards the sea. Pearl artists will take over the stage to perform an elegant, contemporary dance piece.

Visitors can also see live replicas of Bedouin tents and tools at a small heritage village. A falcon keeper will add to the lively atmosphere with the national symbol of the UAE in between the sets, along with henna and calligraphy artists demonstrating local arts and culture with their incredible talents.

If mall is where your heart is, you can still experience the National Day vibes as many of the city’s popular shopping and entertainment spots come together to spread the Emirati cheer from 1-3 December, as a result of which, your chances of witnessing traditional Arabic music performed live by talented Emirati musicians are very high.

Indulge in pure fun and thrill at the Theme Parks

The city’s first mega-themed indoor amusement park is livening up this year’s National Day celebrations with exclusive offers for UAE residents to spend the day reliving their childhood.

This theme park destination is getting ready to celebrate the big day across all its theme parks, including LEGOLAND Dubai, MOTIONGATE Dubai, Bollywood Parks Dubai, LEGOLAND Water Park along with Riverland Dubai. Best part? Guests looking to explore more than one park will only have to pay Dhs47.

Splash around at the city’s best Water Parks

This conventional water-based theme park built on the foundations of Arabian folklore is inviting guests to celebrate the UAE National Day with a special discount for an entire month. Enter the park for just AED141 starting 15 November, which includes a limited-edition flag-themed luxury towel and a meal at one of the park’s many dining spots. You can also enjoy unlimited access to Wild Waterpark when you book the Splash and Syau package at Zabeel House Al Seef and Zabeel House MINI by Jumeirah, which start at AED 250 per night.

To celebrate National Day, the five-star resort is having a huge “Splash Sale” – slashing its prices up to 50 percent on a number of its attractions between Thursday, November 29 and Saturday, January 19, 2019. The five-day splash sale kicks off on Saturday November 24 until Wednesday November 28.

Be stunned for good at La Perle by Dragone

La Perle is celebrating the UAE’s 47th National Day with 47% off shows from 28 November to 2 December.  The aqua theatre uses state-of-the-art technology that produces waterfalls, torrents and rain on a floor that floods and drains within seconds. Expect to see 65 world-class performers from 23 countries performing breathtaking and extraordinary acts including acrobatics, contortion, flying, diving and even motorcycles defying gravity.

Indulge in an Emirati dining experience at Al Mashowa

Just the perfect time to dig your tooth in the lavish Emirati gourmet. To mark the National Day, the authentic Emirati restaurant Al Mashowa at City Walk will be offering a ‘Fawalat Al Mashowa’ afternoon tea featuring Emirati sweets such as chebab, mohallah and assidat al boubar, and you can wash it all down with the famous karak tea. That’s not all, as it will also be offering ‘Srood Al Mashowa’, an Emirati sharing breakfast for two that includes balaleet, baith tamat and fried egg, dango, bajella and white beans, a cheese platter, chammi with dates and cream, a bread basket and karak chai. Whoa! That’s a lot of food.
Visit Sun-Thu 8am-midnight; Fri-Sat 8am-1am. Afternoon tea: 4pm-7pm

Get a free burrito from Taqado

You can get a free burrito for free at Taqado at Mercato Mall on Sunday December 2. Kicking off at 5pm, the restaurant will be giving away 1,000 free burritos, and it doesn’t stop until each and every burrito is given away. Yay!

Best Things to Do During Eid Al Fitr